I’m not sure if I ran into MOFF or if they ran into me, but either way, it was a great meeting.

I came across a brand new product called MOFF.

MOFF probably had some of the most highly energized people at their display.

Moff is an interactive device- you place this watch like device on your wrirst, download the app, and then choose an app and move your arms.As you move your arms,  you will hear the sounds associated with your movement and the app you made.

Now THIS TOY is the  epitome of active play ! I will write more about this toy in the newspaper I wrote for , but the MOFF gadget is so hilarious ,entertaining, amusing, surprising, and more. If you do not have fun  with this gadget, then you are not human, hahahahah. This toy rocks.

This is definitely one of the best toys I saw at Toy Fair 2015. 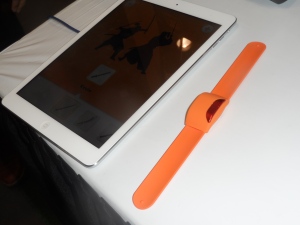 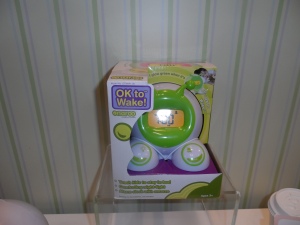 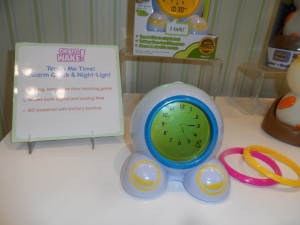 PATCH PRODUCTS:
I think when people think about toy companies and the most powerful ones and their associated states, they think of California, New York, and Rhode Island. But out west, in a place called Wisconsin, theres toy company called PATCH PRODUCTS which is really cranking out eye popping toys.

I first came across PATCGH products at a Toy Fair a few years ago, and low and behold, they are still making great and wonderful products. Their Mirari line is for infants- these toys have an educational aspect to them. I personally have the pop pop piano– love it.And I also had the original MY IPAD with the four arrows. PATCH has updated the MyIPad and they had more toys to show from the mirari line which were fun. I don’t know any kid that does NOT like the Mirari line– that’s right, not one kid. All the kids I know really enjoy the Mirari LIne.

Their OK TO WAKE line was new, I had never seen it. This is a really cool line PLUS the designer was there..yes. I love it when the designers are there to explain their motivation behind the toy. The OK TO WAKE alarm clocks seem really fun. They are intended to train kids, using color lights to let them know when its okay to get out of bed. I believe the lights were green and red. the face of the clock also has interchangeable plates. I like the way the cock looks like a chubby headless friend. its a clock but its inviting due to the round buddy and the cool feet. Who wouldn’t want to stay in bed with an alarm clock that looks like this?

Next PATCH showed me the new CHRONO BOMB. This is like a spy like game where you have to try to avoid the lazer wires.You can set the game to a timer. Leave it to PATCH to have an actress demonstrate how the toy works…Ahhh PATCH never ever disappoints..ever!!

PATCH also had many more new games, like the YETI SPAGHETTI. In this game, players remove a stick and hope the little figurine does not fall into the ball, If it does, you’ll probably scream NOOOOO because at that point, you have lost the game.

PATCH’s Stack Attack  Dice game was neat too. In this game, the players have to roll their dice and try to stack them from 1-6. if they don’t have the next number , then the next player goes. You see, the concept of this game is very verrryyy simple, but I bet you players could play this game for HOURSSSSS.. This would be a great game that could be played around the world.

I really enjoy PATCH toys because MANy of them do not require batteries or electricity, meaning that poor people can afford to play with their products. I think so many times, games have economic barriers. However, games like those under the PATCH brand make it easier for parents to have useful games for their children.

The Cheese Dip game is a simple game too (although I will admit that it took me a while to truly “get” how this game was intended to be played. Once I “got” it, I was like ‘oh great, cool game”. Cheese Dip, Puppy Up, and Sparky are all games which can be labeled as “educational games” because they help build the shape recognition, color association, and number association skills of children.

Patch has so many toys it usually takes a while to get through their display, but when its over you are like NOOOOOOOOOOOOOO that was soo much fun!!!!! Patch Products is also introducing the travel version of the game, Game of Things. The inventor of the game, Mr. Quinn was there to answer all of my random questions. He was a very nice guy and he gave me insight into the creation of the game.

Patch Products had at least two handfuls of new products, and every single product was a wonderful product.

PATCH PRODUCTS, yes that company over there in Wisconsin, they are really creating amazing games and toys. the thing with PATCH products is that they do BOTH– they create TOYS and GAMES, which makes them an important force in the toy world. 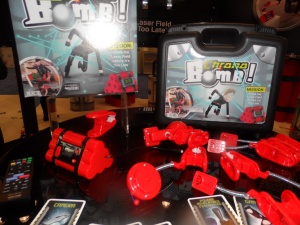 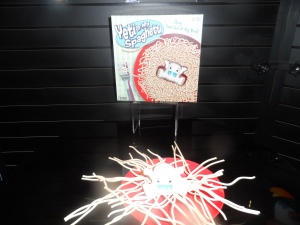 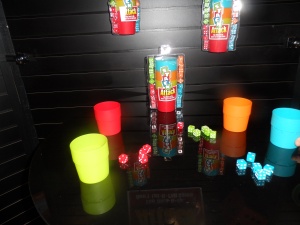 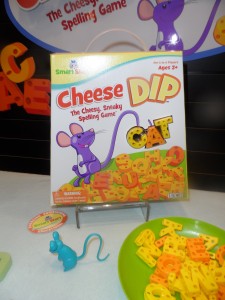 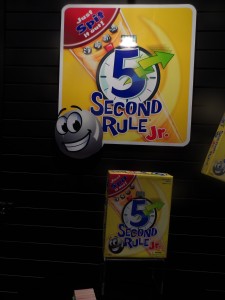